Taking a break from recent social architecture posts, here’s some more technical security content. It’s a pretty soft introduction to reverse engineering and binary patching for those unfamiliar with the topic.

One of the tools I use in my social research recently became abandonware. The product requires annual registration, but earlier this year the developer’s website disappeared, no one has been able to reach them by email for months, and I literally cannot give them my money to reactivate the product. Unfortunately, I am still reliant on the tool for my work. With no alternative, let’s see if the software can be reactivated through more technical means.

The tool in question is a graph layout plugin for Cytoscape, so it’s distributed as a JAR file. JAR files are bundled executables in Java - they’re literally ZIP archives with a few specific files inside.

The goal is to find where the software checks whether it’s registered, and patch the binary so it always returns true.

Since this is Java, we’ll start with a decompiler. The goal of a decompiler is to go from compiled bytecode back to human-readable sourcecode in a language like Java or C. On platforms like x86 this is often very messy and unreliable, both because x86 is disgustingly complicated, and because there are many valid C programs that could compile to the same assembly. Fortunately, today we’re working with JVM bytecode, which is relatively clean and well-understood, so the JVM to Java decompilers are surprisingly capable.

I’ll be using JD-Gui, the “Java Decompiler”. Sounds like the tool for the job. Open up JD-GUI, tell it to open the JAR file, and we’re presented with a screen like this: 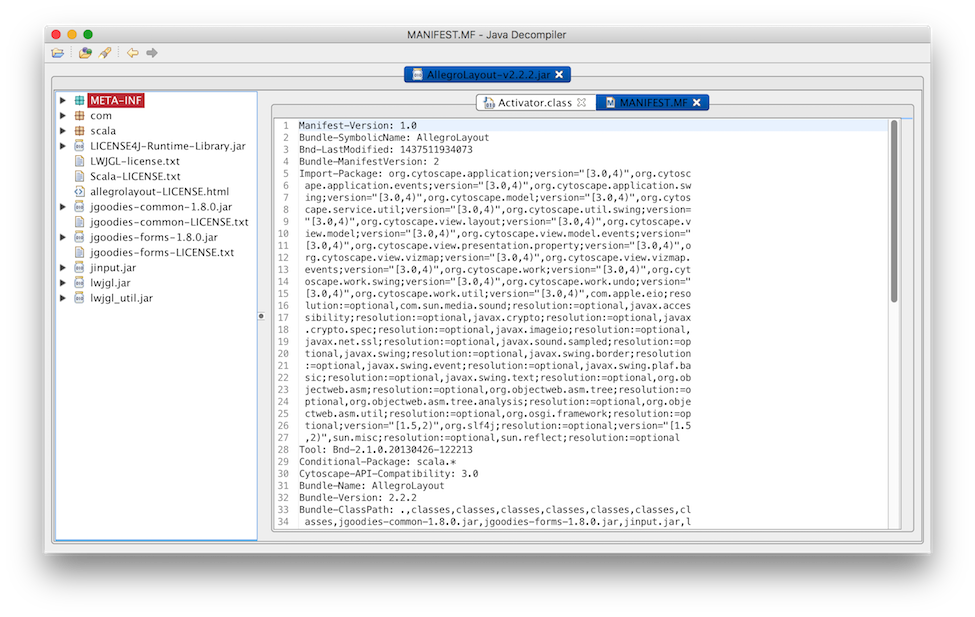 Wandering through the .class files in com (where most of the code resides), we eventually find reference to public static boolean isActivated(), which sure sounds promising. Here’s the method definition: 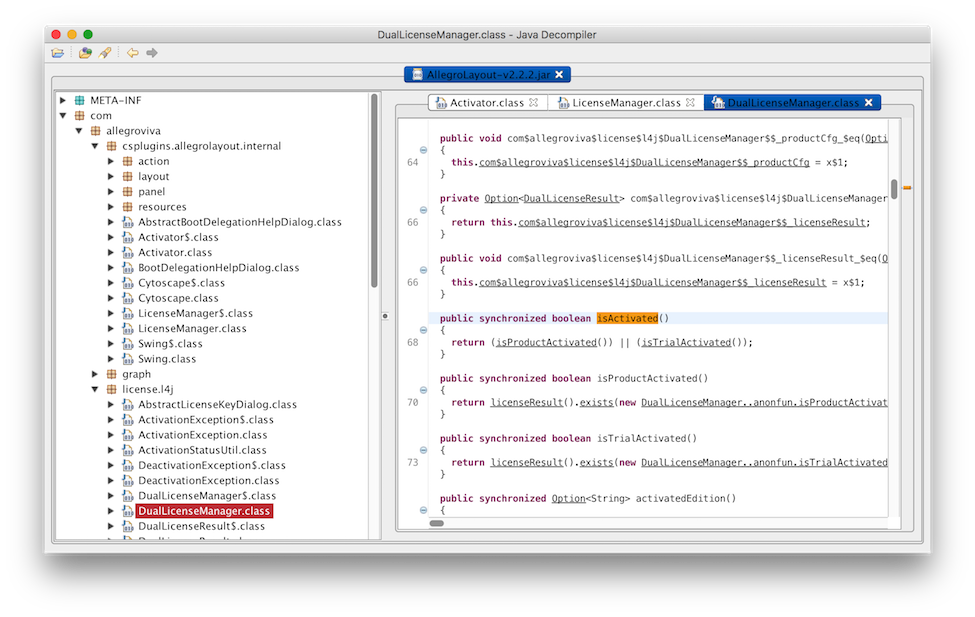 If either the product is activated, or it’s still in a trial period, the function returns true. This appears to be our golden ticket. Let’s change this method so that it always returns true.

There are two techniques for patching Java code. The apparently simple option would be to use a decompiler to get Java code out of this JAR, change the Java code, then recompile it back in to a JAR. However, this assumes the decompiler was 100% perfectly accurate, and the JAR you get at the end is going to look rather different than the one you started with. Think throwing a sentence in to Google Translate and going from English to Japanese back to English again.

The cleaner technique is to leave the JAR intact, and patch this one method while it is still JVM bytecode. The decompiler helped find the target, but we’ll patch at the assembly level.

First, we’ll need to extract contents of the JAR. Most JVM bytecode editors work at the level of .class files, and won’t auto-extract and repack the JAR for us.

Now all the individual files visible in the JD-Gui sidebar are unpacked on the filesystem to edit at our leisure. Let’s grab the Java Bytecode Editor, open the DualLicenseManager.class file, and scroll to the isActivated() method: 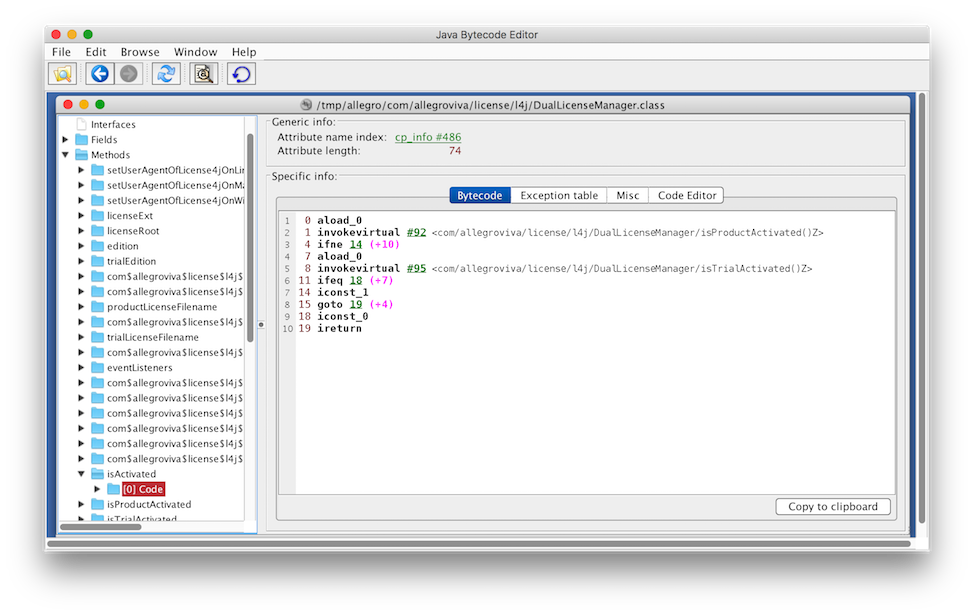 Uglier than the Java, but not hard to follow. The patch is trivially simple - change the iconst_0 to an iconst_1, so that no matter what, the method always pushes and returns a 1. 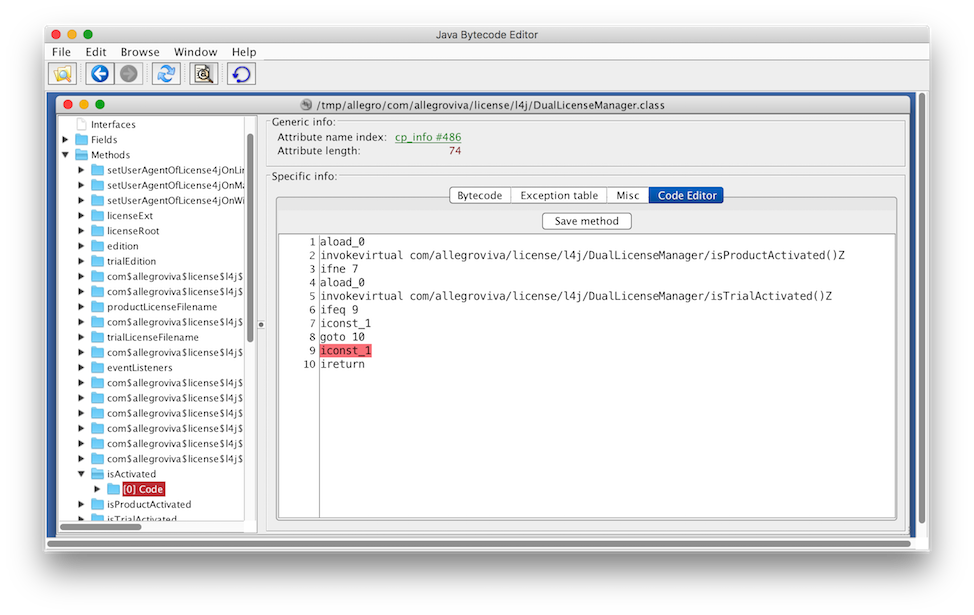 Then we save the method, and it’s time to re-pack the JAR.

Re-creating the JAR is only slightly more complicated than unpacking:

From here, we can reinstall the plugin in Cytoscape and it runs like a charm.

Often, this kind of binary patching is less straightforward. This work would have been much more time-consuming (though not much more challenging) if the executable had not included symbols, meaning none of the method names are known. Most C and C++ executables do not include symbols, so you are forced to learn what each function does by reading the assembly or looking at the context in which the function is called. This is done for performance more than security, since including symbols makes the executable larger, and is only helpful for the developers during debugging.

More security-minded engineers will use tools like Packers to obfuscate how the code works and make it more difficult to find the relevant method. These are not insurmountable, but usually require watching the packer decompress the main program in memory, waiting for the perfect moment, then plucking it from memory to create an unpacked executable.

Another option is including some kind of checksumming so that the program can detect that it has been tampered with, and refuses to run, or modifies its behavior. This is rarely helpful however, since the reverse engineer can simply look for the appropriate hasBeenTamperedWith() function and patch it to always return false. An insidious programmer could try to hide this kind of code, but it’s a cat-and-mouse game with the reverse engineer that will only buy them time.

Ultimately, this tool was built by scientists, not battle-hardened security engineers, and included no such counter-measures. Should they resurface I will gladly continue paying for their very useful software.