Pursuance is a collaboration tool for activists, journalists, and other groups seeking positive change. At the heart of Pursuance is task management, information sharing, and communication, focusing on combining everyone’s unique talents and backgrounds, and adapting to the rapidly changing membership that plagues volunteer groups.

Each user can have multiple roles within an organization, or pursuance. These roles can be used in:

This idea is inspired by Discord roles: 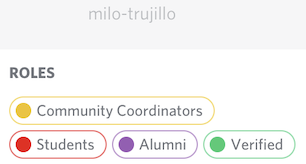 On this chatroom platform, roles give users read or write access to different channels within a server, and a range of moderator powers including creating new roles and channels. Roles on Discord have an explicit hierarchy, determining which roles can assign which other roles, and what color a username appears in when the user has multiple roles.

We want to take this idea and apply it outside a chatroom, representing more flexible relationships than a simple hierarchy. Specifically we want to represent tree structures of who can contact whom, or community clusters with different expertise for reviewing documents, two use-cases discussed in an overview of Pursuance.

A role is a title, combined with a set of permissions describing what users with the role are capable of. Therefore we need to describe Pursuance rules as we define roles.

Pursuance rules mostly describe what members do and do not have permission to do. What permissions exist?

Initially pursuances have one user, the creator of the pursuance, with the role “founder”. This role has all permissions, thus allowing them to construct the rest of the pursuance as they see fit.

We need some syntax for describing pursuance rules and roles. Here’s a first attempt describing a document review system, where some journalists need help analyzing a trove of documents, and confer with experts when appropriate:

Journalists are allowed to contact anyone, and can invite new members into the pursuance as either journalists or security-experts. They can also designate existing users as security experts.

Security experts can review certain documents on computer security topics. Therefore, they need to be able to communicate their findings back to journalists. They can also invite their peers as fellow security experts. However, they cannot invite users with any other roles, or promote existing users with different roles to security experts.

Who can create roles or rules within a pursuance? Initially, only the founder, who has permission to do anything. Do we want to delegate this permission?

At first, delegation seems advantageous - we can allow moderators to refine rules for their community on behalf of administrators, or create regional community leaders who can create new roles for organizing local membership.

However, delegating this authority makes the rule system dramatically more complex. Do we add some kind of limit, like “members with the power to create roles can only give those roles subsets of the authority their own roles have?” What if the user’s permissions change? Does each role have a parent user it receives authority from? A parent role?

That’s a lot of complexity for a use-case that won’t occur often. How large do we expect a pursuance to get? Twenty users? A hundred, for some of the larger communities? How many roles and rules are necessary to administer such a group? Most pursuances will probably be satisfied with five or less roles, and rules that do not change, or rarely change, after group creation. Maybe more roles, if they’re used as simple team labels, but such roles would be boiler plate, used for task assignment and mailing lists only.

Instead, let’s keep this design as simple as possible, and enable complexity through linking pursuances together. Consider a political action group with city, state, and national levels. Instead of creating one massive pursuance with many roles and rules and complex delegation, we can create a tree of pursuances, each with their own organizational structures. Shared members between the groups act as delegates, and allow sharing of information and tasks between pursuances.

From a rule-making perspective, this means we can leave only founders with the power to create and edit roles. If a founder wants to delegate this power, they can appoint other founders.

Expecting everyone to learn a new language to describe their organization’s social structure creates a high barrier to entry, even if the language is simple and easy to learn. Fortunately, this is largely unnecessary.

Instead of starting each pursuance with a blank slate, we can provide a list of organizational templates to choose from. This is pretty similar to what Overleaf does: LaTeX is a complicated language with a steep learning curve, so they provide a library of example LaTeX documents as starting points, dramatically simplifying the process for new users.

Not only does this make Pursuance easier to use, but it provides an opportunity to promote power structures we think are healthy or productive, exposing communities to new ideas.

Below are a handful of simple examples. As we expand the capabilities of pursuance rules, this list should be expanded.

To make this a moderated chatroom, we can add a second role:

The founder can now designate moderators, who have the authority to kick any member out of the pursuance.

This creates a 3-stage filtering system, wherein journalists can recruit sources directly or recruit trusted helpers. Sources can present their findings to any handler, who can forward relevant information to the journalists. Handlers act as moderators, and can kick troll-sources or recruit new sources without interaction from journalists.

Everything discussed about roles so far is for describing communication boundaries and recruitment of new users. What other attributes might we want to add? Here are some early ideas:

The role system defined above is pretty primitive, and will likely develop over time. However, this is already enough to describe how different people and groups can collaborate, how new users are added to a pursuance and assigned different roles within the organization, and how privacy is enforced.

By placing an emphasis on roles over users, we give a pursuance some flexibility as membership changes. Still missing is the ability to respond dynamically to membership changes. For example, we could add rules to a role such that when someone leaves the pursuance any tasks assigned to them are reassigned to the role at large, or to a random member within the role. This process can also occur automatically for inactive users. There’s some complexity surrounding which role to assign the task to if the user had multiple roles, but that’s for a later post on task management in Pursuance.

Also missing so far is any mention of how information is formally shared between pursuances - shared membership is sufficient for forwarding an email, and we should leverage informal systems like this whenever they are beneficial. However, it would be ideal if we could describe tasks that cross pursuances. These shared tasks would be assigned to different people in each pursuance, and facilitate task-based communication between pursuances, without explicitly merging the groups.