Pursuances are built around specific goals, or “pursuances”, so it makes sense for the Pursuance platform to be task oriented. Because pursuances tackle a wide variety of topics they will do most of their work off the Pursuance platform using more appropriate tools, including wikis, source code management, shared text editors, and file hosting. Pursuance is a place to organize with other activists, and collaborate with other groups. Therefore we will place an emphasis on collaborative task management, leaving the nature of the tasks as generalizable as possible.

GitHub issues, while designed for tracking planned features and known bugs in software projects, work well for general task management. Lets look at how this idea interacts with the user, role, and permissions systems from previous posts.

Tasks have a few attributes:

Tasks can be assigned to multiple roles and users, by anyone with a role granting them power to assign tasks to another role. For example, anyone in the “leader” role below has power to create tasks and assign them to anyone in “worker” role, or the “worker” role as a whole:

By default, users can only see tasks that are assigned to them or roles they are in. This can be overridden with the cansee permission, such as:

Tasks can be tagged with labels, defined by the pursuance: 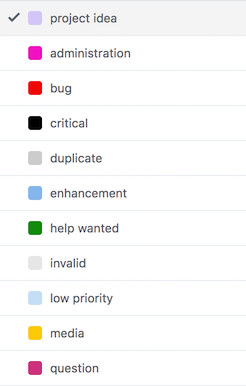 These labels have no structural or rule-based effect (so far), but are searchable, and provide an organizational level more fine-tuned than assigning to roles.

To implement this idea we need two new permissions:

We can build a multi-tier moderator setup, where the project leader can designate organizers, who bring in workers and assign tasks to them. Organizers label those tasks appropriately, acting as managers. This might look like:

(Note that we don’t have to give ‘project-leader’ all the same permissions as ‘organizer’, because anyone that’s a project-leader can simply assign the organizer role to themselves)

We can also create a simpler, more anarchic setup, where every member can create labels and assign them to any task:

Every task has a timeline associated with it, which describes how the task has changed, and includes discussion of the task:

Any user with a task assigned to them (or a role they are in) can comment on a task. They can also close or re-open the issue as they deem appropriate.

This timeline provides a task-based discussion space, organizing the entire pursuance akin to forum threads. This will probably be the primary means of communication for many pursuances, since most discussion will be about particular tasks. By allowing anyone assigned to the task to participate in discussion, we’ve created a private conversation space with only the relevant parties, reducing noise.

A key objective of Pursuance is facilitating collaboration between groups, rather than within groups. Tasks are the main unit for collaboration in Pursuance.

Therefore, tasks can be assigned to roles in other pursuances, so long as those pursuances accept by amending their rules. For example, say pursuances “greenpeace” and “investigating-enron” want to collaborate. Greenpeace might create a role like:

While “investigating-enron” would add an equivalent role:

Now anyone with the “environmentalist” role at the “investigating-enron” pursuance can assign tasks to themselves and the “oil-investigators” role at the “greenpeace” pursuance, and vice-versa. We can provide a graphical tool for “creating a new collaboration role” that fills out rules for a role as above, so users do not have to touch the Pursuance language unless they’re doing something especially clever.

This is more nuanced than two groups assigning work to one another. Since any user with a task assigned to them can add a message to the bottom of the task, we have effectively created a shared forum thread between two distinct communities. Users from each community can participate without previously knowing one another or explicitly adding one another to the conversation. We have an ephemeral, task-oriented, shared communication space for an arbitrary number of communities.

Further, this shared space includes only the relevant people from each community, without dragging in the rest of their infrastructure, making accounts on one another’s services, and so on.

In addition, we can create however many of these spaces are necessary through the creation of additional roles: “Here’s a task with our journalists and your journalists”, “here’s another task with our lawyers and your lawyers.” If additional expertise is needed, either pursuance can add more users or roles to the task, per their own pursuance roles.

There are a few areas of the above proposal that aren’t fully thought through.

The above proposal works if we assume that role and pursuance names are constant. It is simplest to enforce constant names, but what happens if a pursuance is deleted? The collaboration rule no applies. What if a new pursuance is created with the same name as the old one? Does this introduce the possibility of attack through old pursuance rules?

Alternatively, we can use IDs, as in Discord. Internally, a rule would look more like accept tasks oil-investigators@<UUID FOR GREENPEACE PURSUANCE>, and when presented to a human we look up the UUID and substitute the current pursuance name. When the rule is written, a human writes the current pursuance name, and the UUID is substituted in. This allows pursuances to change their names without breaking collaboration rules, and prevents collision if a new pursuance with the same name is created after the old one is deleted.

We cannot use the same solution for roles, because the remote role may not exist yet - in the above example, the oil-investigators role is created before the corresponding environmentalists role is created, or vice-versa. Therefore, the rule no longer applies if the remote role is renamed. However, this may be fine - it allows any pursuance to change which roles are collaborating with which pursuances by changing the role names.

Above we’ve described a cansee rule allowing different roles to see tasks that are not assigned to them. This makes sense in a larger organizational context, but is it unnecessarily complicated? We could allow all members of a pursuance read-only access to all tasks, and only assigned users and roles receive write-access.

This would simplify the structure of a pursuance, and perhaps make the UI simpler. However, it would also emphasize the use of multiple pursuances to a massive degree. For example, a group may have a “general worker” pursuance and a “trusted contributor” pursuance to create a separation of knowledge and trust.

In my opinion the cansee rule is beneficial, and a pursuance can manage trust and information using roles, and create multiple pursuances for separate broad objectives. This is worth having a discussion over.

How are Users Assigned

When a task is assigned to a role, access rights are clear: Anyone currently possessing the role has read and write access to the task, and if they have the role unassigned then they lose access to the task. If a user is part of multiple roles to which the task is assigned, they retain access unless they are removed from those roles, or the task is unassigned from those roles.

If we assign a task to a particular user within a role, this becomes trickier. Do we only track the user that the task was assigned to, and give them access so long as they are a member of the pursuance? Or do we track which role the user received access through, and automatically revoke their access when this role is removed?

I am a fan of the later, and envision a table for assignments akin to:

This allows us to track what users received what access via what role in what pursuance, and therefore when a user has a role removed we can unassign all applicable tasks with something like:

We now have a vision for what a pursuance looks like (a collection of users given various roles), what the main activity within a pursuance is (creating and assigning tasks, commenting on those tasks), and how pursuances collaborate (through creating shared tasks and inviting relevant parties). We’ve outlined a rule system to facilitate task, user, and role management.

This is a good structure once groups are established, but we’re missing the catalytic step: How do users discover and join pursuances? Inviting users into an existing community is effective only when you have an existing social network to build from, but one of the main objectives of the Pursuance Project is to make group discovery and participatory activism trivial.

Next up: How pursuances can present themselves to new users, and how we can visualize how pursuances are interconnected, and what skillsets are needed.